It gradually warmed up and new shoots grew.
I visited Hiroshima Peace Memorial Park, where I have been cleaning in the past.

It was a very sunny and refreshing day. The temperature was high enough to be able to spend short sleeves even in winter.
It felt like I was in the Southern Hemisphere. I had the feeling that something good was going to happen.

On this day, we had a miraculous encounter.

Mr. Terao is telling tourists about his experience of hit by an atomic bomb in front of the Atomic Bomb Dome as a volunteer guide.
His age was only 4 years and 6 months when the atomic bomb was dropped.
He was exposed on August 6, 1945, about 4 km from the atomic bomb.

He was born in a kajiya-town about 200 meters west of the Atomic Bomb Dome.
This is Honkawacho, Naka-ku, now.

He remembers that he and his mother had been to the Prefectural Industrial Promotion Hall together. 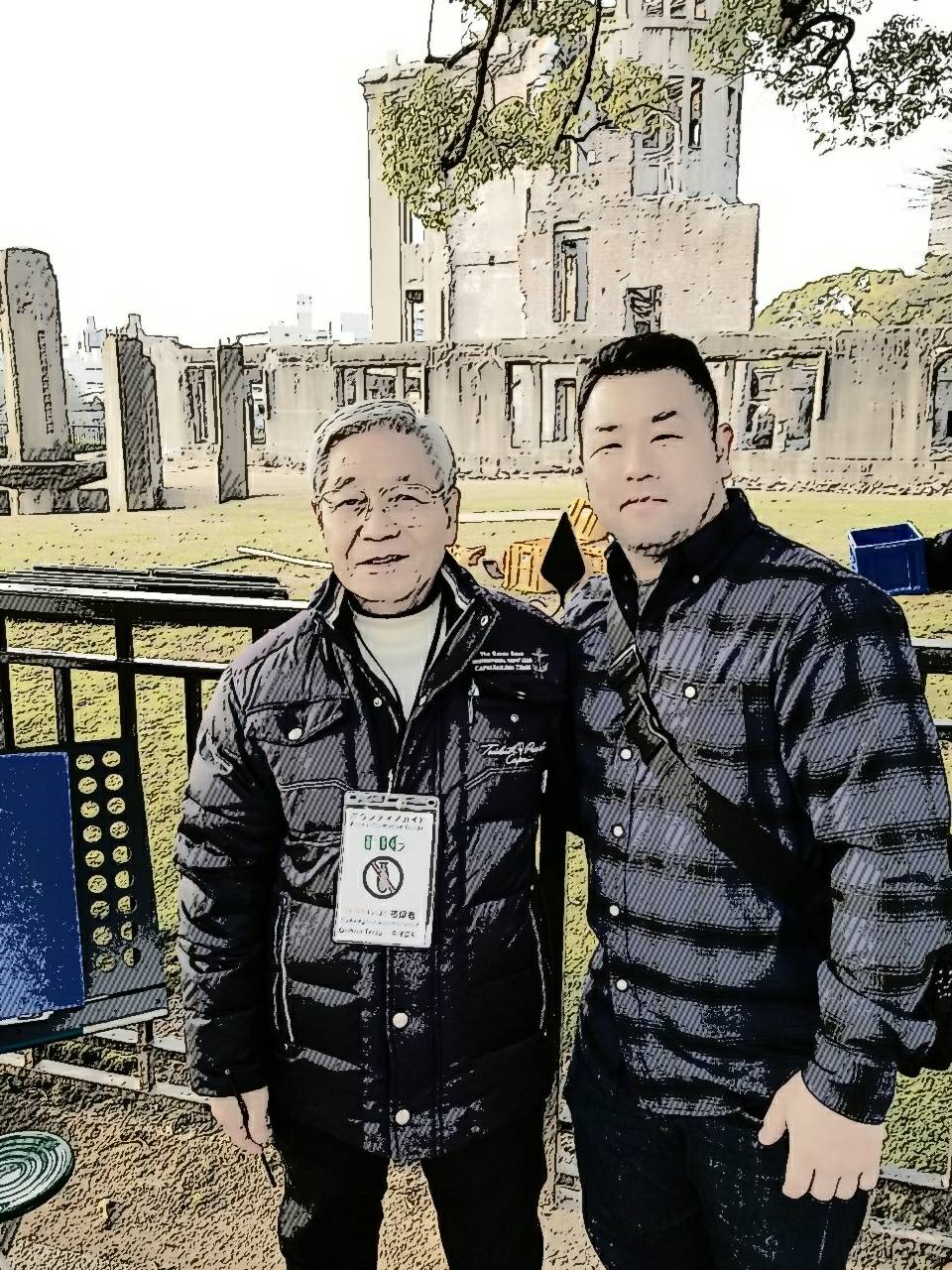 He was told this way.

「My father saved my family in exchange for my father's life.」

In July 1945, just before the an Atomic bomb dropped, I received news that my father had died in China.

He was hit by an atomic bomb two weeks after evacuation. It was about 4.1 km away from the hypocenter, so I was saved lucky.

His father died about a year before the Atomic bomb drop.
He learned of his father's death about a month before the bombings.

If you did not receive the news one month ago…He choked up with tears.

What was an atomic bomb like?
Why was it dropped?

Many things I knew for the first time were very very shocking.

In the past, he has appeared on television programs watched by 280 million households worldwide.
The program was broadcast by a TV station in Tokyo, Japan.

Why did him know it was aired all over the world?

They came from each country to Japan.

They came to see Mr. Terao from so many countries and regions.

And when they came to Japan, he get to knew that the TV program was broadcast worldwide.

Mr. Terao is making a model that faithfully reproduces before and after the atomic bomb dome was damaged.
He is now retired, but has been studying stained glass for several years.

Every time I saw the Atomic Bomb Dome, I remembered my parents who died.

I was sitting on a bench on the opposite bank across the Motoyasu River and looking at the Atomic Bomb Dome.
Then my parents reminded me and gave me courage.

The atomic bomb dome, reproduced in stained glass, is very beautiful and faithful to the finest details.
I was most surprised. How! About 120 parts are used for the ceiling.

He seemed to have had a hard time finding the copper parts for the ceiling.

It was completed in the summer of 2014. It was pointed out soon.

「Isn't it different from the actual roof color?」

He searched for colourful materials and studied the statue of the famous Statue of Liberty many times.

An atomic bomb dome created by ordering all parts from the United States.

The whole is made up of more than 3,000 parts, which is exactly the fruit of Mr. Terao's efforts.

I don't think many people have seen the Atomic Bomb Dome before it was hit by an atomic bomb.

What kind of building was it? What was the place to do?
It is a very valuable material.

1915 The building was completed by the Czech architect Jan Letzel as a product exhibition hall in Hiroshima Prefecture.

At that time, most of the central part of Hiroshima was a wooden two-story house.
The bold European-style architectural design was very rare and very groundbreaking for citizens.

The whole building has many windows and is three stories high.
The central part of the front is a five-story staircase with a courtyard.

The size of the courtyard was about 500-600 tsubo. Trees were planted there.
The Western style garden also had a pond with a fountain that spewed water from all sides.

The first floor was mainly for office use, and the second and third floors were for display.
The work in the building involved collecting and displaying reference products from other prefectures, as well as adjusting products and other products.

Providing a venue played a role as a museum or art museum.

And that day came suddenly.

Since then, its appearance has become a World Heritage Site that speaks of wonder.

The encounter with Mr Terao was shocking.

He taught me about things other than the story of peace learning that I learned when I was a student.
Once again, it was a good opportunity to think about peace.

And I felt that this story had to be passed down to posterity.
Even if you can't do anything with your own power,

If you take the first steps like Ms. Greta Thunberg, the scenery will look different.

When I was obsessed with Mr. Terao's experiences, the sun started to settle down.

Since when that Mr. Terao came to be called a guide to sunset at some time.

The day I met was the second volunteer guide in 2020.
It seems that his body may deteriorate year by year and the number of days he can come has been reduced.

Such a miracle that happened to overlap by chance "2" will never come again.
I happened to go to Hiroshima Peace Memorial Park on that day and met a miracle.

「A coincidence like today is the first in the past five years.」

The reason I was surprised was that all three men, including me, were male and listened to Mr. Terao's story until the end.

Thanks for the once-in-a-lifetime encounter.

I'll see you someday and thanks to Mr. Terao!

Thanks for Mr Terao, many valuable stories. 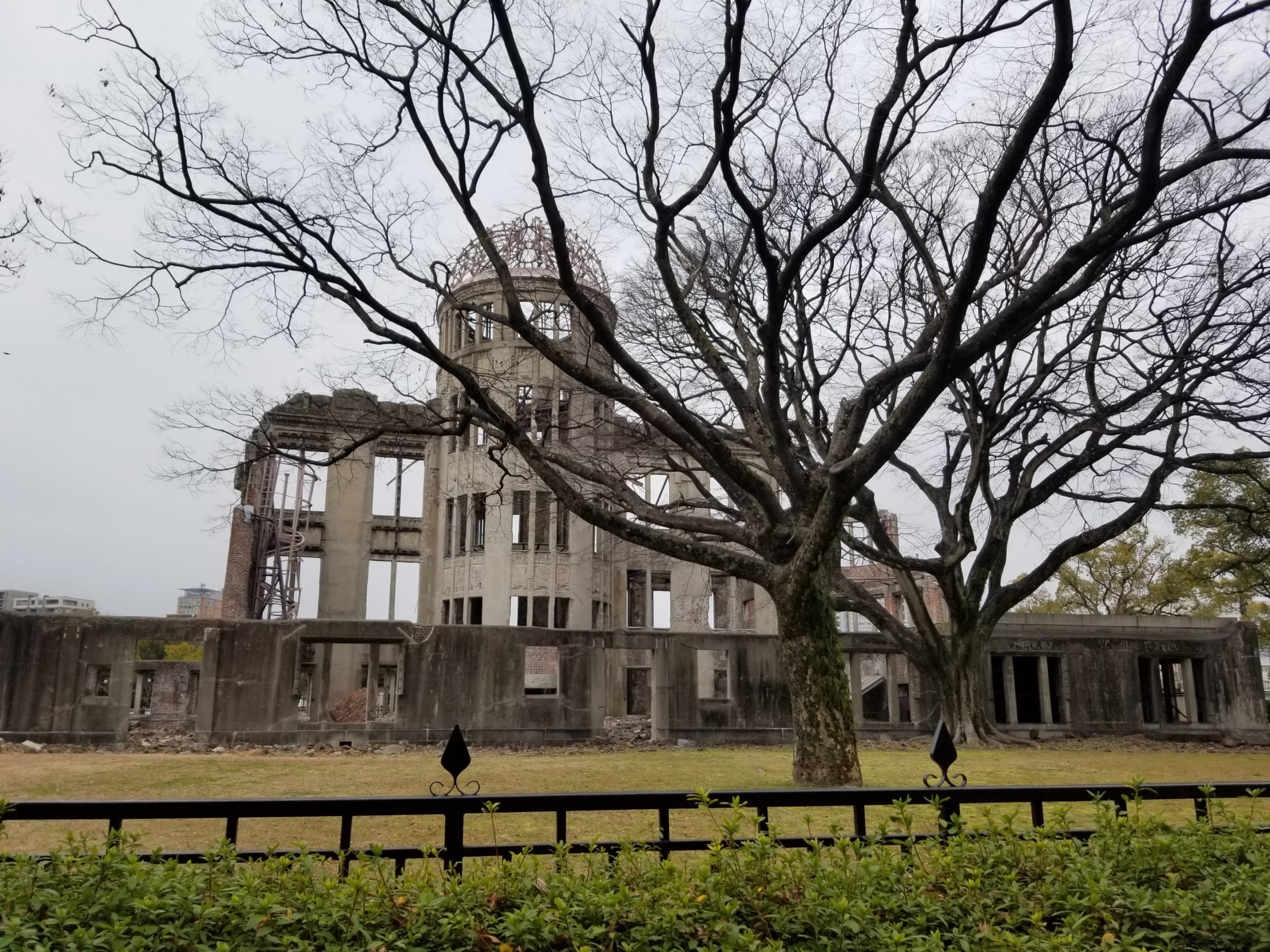